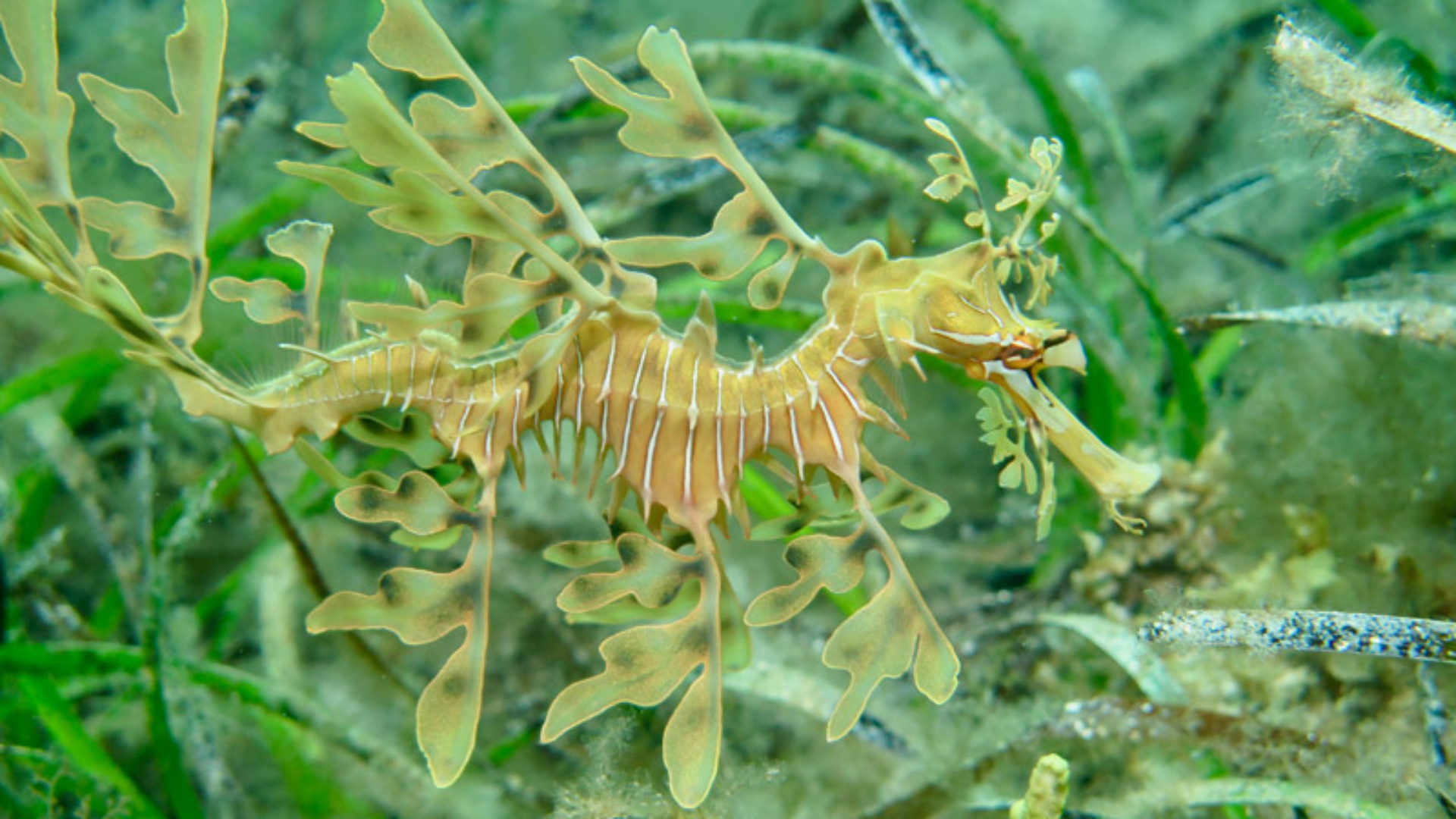 Seadragons are elegant members of the family Syngnathidae, which also includes seahorses and pipefishes. Wild seadragons are found only along the southern coast of Australia, and there are currently three known species: the common (or weedy) seadragon, the leafy seadragon, and the recently discovered ruby seadragon. The three species can be differentiated based on their appearances, their genetic relationships, and the ranges they occupy.

Common seadragons have red-brown bodies, mostly covered with yellow dots, and are found across Australia’s entire southern coast from just north of Perth to Sydney, including Tasmania. Leafy seadragons are more yellow-brown, and have more elaborate appendages and stripe patterns on their bodies, with white markings on their faces and a more restricted range, spanning the stretch of coast from Perth in the west to Adelaide. Both commons and leafies live on temperate rocky reefs, and prefer kelp or seagrass environments in temperate water, between 12-19 degrees Celsius. Ruby seadragons have a brilliant reddish coloring that appears dark brown in the deeper, more light-limited habitats where they live, and lack the leaf-like appendages used by the other two species for camouflage. Rubies have only been sighted alive through Remotely Operated Vehicle (ROV) video footage, off the coast of Western Australia. Several beach-washed specimens from the same region have been preserved in museum collections.

What the three species have in common is their slow, graceful swimming, accomplished with small, transparent fins on their bodies. All three types of seadragon have fused jaws and long, tube-like snouts used for sucking up small crustaceans- fused jaws are a hallmark of the syngnathid family. However, leafy and common seadragons differ from seahorses in that they lack prehensile (grasping) tails. Interestingly, the ruby seadragon appears to have a prehensile tail, based on examination of ROV video footage. Researchers must continue to study the tails of each species in detail to better understand their differences and how they might have evolved.

Common and leafy seadragons depend on the appendages that unfurl from their heads, backs, and tails to camouflage themselves among the kelp beds and seagrass meadows where they take refuge as well as hunt. A seadragon eats tiny mysid shrimp and other zooplankton by sucking the food in quickly through their tube snout. When diving with seadragons, you might see them feeding. Depending on the region in which they live and the food supply available, weedy seadragons have been known to grow up to 45 cm long (about 18 inches), and leafies up to 35cm (about 14 inches).

Seadragons can be preyed upon by bigger fish, but are not very susceptible as prey because they are so well-camouflaged in their habitats. They are also quite bony and likely not very palatable for other creatures to eat. Sometimes they are seen missing appendages or even entire tail sections after encounters with larger animals like sea lions, being tossed about by storm surge, or even kicked by divers’ fins. They are slow swimmers and so, while well-concealed,  are unable to escape precarious situations quickly.

One of the most intriguing aspects of seadragon behavior involves their mating and brooding rituals, which begin around October-November of each year, depending on the water temperature. Male and female engage in a “dance” in which they mirror one another’s movements as they rise in the water column. Eventually, the female may transfer several hundred eggs to the male, who fertilizes them as they fuse to his tail. The male incubates the eggs for about two months until they are ready to hatch, then tiny seadragons (smaller than a grape) hatch tail-first out of their egg sacs. They grow quickly and are independent right away, able to hunt within a few days of hatching. Juvenile seadragons reach maturity around the time they complete their first year of life.

Many mysteries still exist around the lives of seadragons, and the data collected through DragonSearch will aim to shed light on important questions about their biology and behavior, including how long they live in the wild and how far they move outside of what are currently perceived to be small home ranges. The more we can learn about these fascinating creatures, the more effectively we can work to protect both seadragons and their habitats.